“There Is No God” by Percy Bysshe Shelley

[This essay is a redaction of Shelley's first pamphlet, The Necessity of Atheism (1811) to serve as a note to the line in Queen Mab, "There is no God" (1813). The Necessity of Atheism is greatly expanded and considerably modified in thought and style. A careful study of the two essays will throw some light on Shelley's developing mind during the two crowded years between them. Locke's influence dominates The Necessity while Hume and Holbach are the important sources of the Note.]
This negation must be understood solely to affect a creative Deity. The hypothesis of a pervading Spirit co‑eternal with the universe remains unshaken.

The consistent Newtonian is necessarily an atheist. See Sir Mr. Drummond's Academical Questions, Chapter iii.
Sir W. seems to consider the atheism to which it leads as a sufficient presumption of the falsehood of the system of gravitation; but surely it is more consistent with the good faith of philosophy to admit a deduction from facts than an hypothesis incapable of proof, although it might militate with the obstinate preconceptions of the mob. Had this author, instead of inveighing against the guilt and absurdity of atheism, demonstrated its falsehood, his conduct would have been more suited to the modesty of the sceptic and the toleration of the philosopher.
Omnia enim per Dei potentiam facta sunt: imo quia naturae potentia nulla est nisi ipsa Dei potentia. Certurn est nos eatenus Dei potentiam non intelligere, quatenus causas naturales ignoramus; adeoque stulte ad eandem Dei potentiam recurritur, quando rei alicuius causam naturalem, sive est, ipsam Dei potentiam ignoramus. [6] Spinoza, Tract. Theologico‑Pol. chap. i, p. 14. [Shelley's Note.]
Notes
1.  See Holbach's Système, 1.31‑39, for a similar argument.
2.  "I do not invent hypotheses, for whatever is not deduced from phenomena should be called an hypothesis; and a hypothesis, whether of metaphysics, or physics, or occult qualities, or mechanics, have [sic] no place in philosophy.
3. "To say what he is, one would have to be he."
4. For a translation of this quotation see Appendix D(a).
5. For the translation of the quotation see Appendix D(b). Shelley's text differs slightly from the Loeb. This quotation, lacking the first sentence, is given in A Refutation of Deism.
6. For a collation of Shelley's text with that of Spinoza and translation see Appendix D(c).
SOURCE: Shelley, Percy Bysshe. “There Is No God” (1813), in: Shelley's Prose, edited by David Lee Clark (Albuquerque: University of New Mexico Press, 1954), pp. 97-102.

A haze of gold, the Occident lights up
The window. Now, the assiduous manuscript
Is waiting, weighed down with the infinite.
Someone is building God in a dark cup.
A man engenders God. He is a Jew.
With saddened eyes and lemon-colored skin;
Time carries him the way a leaf, dropped in
A river, is borne off by waters to
Its end. No matter. The magician moved
Carves out his God with fine geometry;
From his disease, from nothing, he's begun
To construct God, using the word. No one
Is granted such prodigious love as he:
The love that has no hope of being loved.

The Jew's hands, translucent in the dusk,
polish the lenses time and again.
The dying afternoon is fear, is
cold, and all afternoons are the same.
The hands and the hyacinth-blue air
that whitens at the Ghetto edges
do not quite exist for this silent
man who conjures up a clear labyrinth—
undisturbed by fame, that reflection
of dreams in the dream of another
mirror, nor by maidens' timid love.
Free of metaphor and myth, he grinds
a stubborn crystal: the infinite
map of the One who is all His stars.

Good poem from a canadian poet! 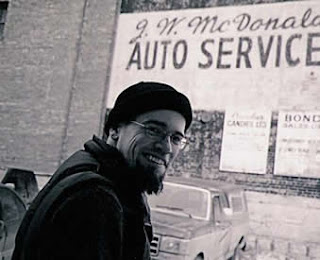 
en Seen of the Crime: Essays on Conceptual Writing, 2012

Please, No More Poetry
Poetry is the last refuge of the unimaginative.
Poetry has little to offer outside of poetry itself. Poets chose to be poets because they do not have the drive to become something better.
Readers are a book’s aphorisms.
All bad poetry springs from genuine feeling. To be natural is to be obvious, and to be obvious is to be inartistic. Poetry, sadly, knows it’s poetry, while writing doesn’t always know it’s writing.
Art is a conversation, not a patent office.
Poets in ostrich-like ignorance of the potential of sharing—as opposed to hoarding—their texts, are ignoring potentially the most important artistic innovation of the 20th century: collage. What’s at stake? Nothing but their own obsolescence. If you don’t share you don’t exist.
We expect plumbers, electricians, engineers and doctors to both have a specific and specialized vocabulary and be on the forefront of new advancements in their field, but scorn poets who do the same.
Poets are now judged not by the quality of their writing but by the infallibility of their choices.
Having been unpopular in high school is not just cause for book publications.
Immature poets imitate; mature poets steal.
In theory, there is no difference between theory and practice. But, in practice, there is.
Rules are guidelines for stupid people.
In poetry we celebrate mediocrity and ignore radicality.
Poetry has more to learn from graphic design, engineering, architecture, cartography, automotive design, or any other subject, than it does from poetry itself.
Poets should not be told to write what they know. They don’t know anything, that’s why they are poets.
The Internet is not something that challenges who we are or how we write, it iswho we are and how we write. Poets—being poets—are simply the last to realize the fact.
If writing a poem is inherently tragic it is because it is hard to believe that the author had nothing better to do. It is inherently tragic because we still choose an out-dated form as a medium for argumentation.
If we had something to say would we choose the poem—with its sliver of audience and lack of cultural cachet—as the arena to announce that opinion?
Please, no more poetry.
Posted by Akhenaten's Dream In Plato's Mind at 11/23/2015 07:47:00 AM No comments: